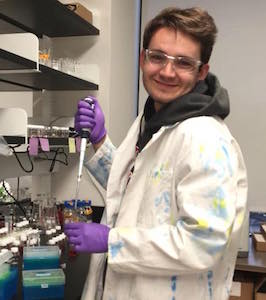 Daniel Robertson, a senior chemistry major, has been awarded a travel grant from the Division of Inorganic Chemistry of the American Chemical Society (ACS).  The grant will help defray the costs for him to attend the 255th National Meeting of the ACS, where he will be presenting on his recent research in Prof. Michelle Personick’s lab.  His talk is titled “(Ag)Au concave cubes as experimental models of computationally predicted active sites for the oxygen-assisted coupling of alcohols”.  The selection criterion for this competitive award is the scientific merit of the work being presented.  The meeting will be in New Orleans during the second week of the Wesleyan spring break.  If you are attending the meeting, Danny’s talk is scheduled for Sunday, March 18 at 8:50 a.m. in room 212 of the Convention Center.  He and Prof. Personick would be delighted to have you there.