Giselle graduated in December 2017, having completed the graduation requirements in seven semesters. At that point she had already applied and been admitted to the B.A./M.A. program and had been working in my laboratory for two years, including two summers. Giselle’s research was a study of the electrochemical cleavage in acetonitrile of benzylic carbon-oxygen bonds, primarily those of benzhydrol and substituted benzhydrols but also simpler benzyl alcohols, taking advantage of the very negative potentials attainable in platinum cathodes in aprotic solvents. The reductions of benzhydrols were found to afford diphenylmethanes in high yield under these conditions. She then turned her attention to the same reductions carried out in perdeuterio acetonitrile (CD3CN). It was anticipated that reduction of the benzhydryl C-OH bond would produce benzhydryl carbanion, which would then abstract a deuteron from the solvent to afford the monodeuterio product (C6H5)2CHD. Surprisingly, the reactions were found by carbon and proton NMR spectroscopy to afford not only the expected monodeuterio product (C6H5)2CHD) but also substantial amounts of the dideuterio and diprotio isotopomers C6H5)2CD2 and (C6H5)2CH2, demonstrating the reversibility of proton transfer from acetonitrile to benzhydryl carbanion. Giselle successfully defended her thesis on December 19, 2018.

In Spring 2017, Zach received Honors for his senior thesis describing his research in my laboratory. He then applied and was admitted to the BA/MA program to continue his research on the reductive dimerization (Zn/AlCl3) of alkyl aryl ketones (C6H5COR) to 1,2-dialkyl-1-alkanones (C6H5)2CHRCOR) and reaction of the latter with superoxide ion, a reaction previously studied by Elaine Tsui of my group (now a graduate student at Princeton University). Our original work on this reaction had been limited to dimeric ketones in which both alkyl groups are the same. However, Zach showed that mixed dimers can be synthesized by using mixtures of two different ketones in the reductive dimerization step. An exciting development in the course of this work was his discovery that the reductive dimerization of cyclohexyl phenyl ketone affords a dicyclohexyl ketone in which ring inversion of one of the cyclohexyl groups is highly sterically constrained, i.e., that the ring is conformationally rigid, as confirmed by x-ray crystallography, variable temperature NMR spectroscopy, and quantum chemical computations. His thesis was defended successfully on December 21, 2018.

On a recent visit to the Chicago area, Prof. Westmoreland stopped by Evanston, IL for a tasty brunch with the cohort of Wes alumni who are currently in the Northwestern University Chemistry Ph.D. program.  Everyone enjoyed hearing about the latest news from the department and waxed nostalgic for their days in the tender embrace of Hall-Atwater. 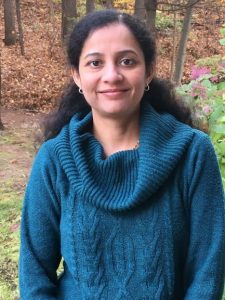 Dr. Prachiti Bhatawdekar successfully defended her PhD thesis, “Conservation of Enantiomeric Excess Throughout a Multistep Reduction / Elimination Reaction Sequence Starting with an Interrupted Feist-Bénary Product”, on November 30, 2018. Prachiti came to Wesleyan in 2011 after receiving her combined Master’s/Bachelor’s degree in Chemistry from  Jiwaji University in India. Prachiti joined Prof. Calter’s lab in the fall of 2011 and worked on a number of projects before settling on a methodological study. She discovered the Interrupted Feist-Bénary products commonly produced in the Calter labs could be reduced to useful benopyran derivatives. Prachiti is now completing an industrial post-doc at CheminPharma in Branford, CT.

Three senior chemistry majors were elected to the Phi Beta Kappa honor society this fall.  The fall election is limited to just a few students and the department is particularly proud that three of our Chemistry majors are among them.

Alison Biester is from Philadelphia, PA and a double major in Chemistry and MB&B.  Theo Prachyathipsakul, who hails from Bangkok, Thailand, is a Chemistry major and an East Asian Studies minor. He is also one of the student leaders of the Free Radicals.  Alexa Strauss, from Glen Rock, NJ, majors in Chemistry and in MB&B.  All three are headed off to Ph.D. programs later this year.

More on the fall class of Phi Beta Kappa recipients with a completely unposed photo may be found at: http://newsletter.blogs.wesleyan.edu/2018/12/06/16-seniors-elected-to-phi-beta-kappa/

Once again, the Chemistry Department’s holiday party, organized largely by the graduate students, was held on campus at the Daniel Family Commons at the end of last semester.  It is always a highlight of the year and nearly everyone attended. The addition of Wesleyan Chemistry Department Trivia was a huge success (except for the time one answer sheet was incorrectly scored. Never fear, Professor Westmoreland demanded to get his points back!!) And a big thank you goes out to Andrea Lee who organized it for us. Photos from the event are below.