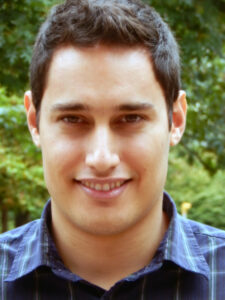 Dr. Vasileios Drogkaris successfully defended his Ph.D. thesis titled “Exploring the self-assembly of conjugated materials and the utility of the thiol-Michael reaction in macromolecular synthesis” on March 2nd, 2021. Vasili came to Wesleyan in 2014 after receiving his B.S. in chemistry from the University of Athens, Greece. While an undergraduate Vasili carried out research investigating ring-opening metathesis polymerization techniques using novel tungsten catalysts. At Wesleyan, Vasili joined the lab of Prof. Northrop and embarked on several research projects exploring the dynamic covalent self-assembly of boronic acids as well as the use of thiol-Michael reactions in macromolecular synthesis. Most prominently, Vasili developed the dynamic self-assembly of a series of boronate ester-bridged oligo(phenylene ethynylene) ladder compounds that have laid the groundwork for increasing our understanding of π-conjugation in one-dimensional versus two-dimensional materials. Vasili has recently accepted a position at Spartech, a leader in specialty plastics and packaging.