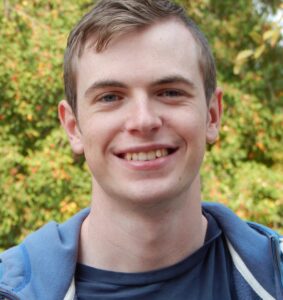 Dr. Sean McDarby recently defended his Ph.D and thesis entitled, “Synthesis and Measurement of Noble Metal Nanoparticles with Well Defined Shapes by Electrochemical and Electroless Approaches.” Sean started at Wesleyan University in 2015 after completing his BS in Chemistry at Southern Connecticut State University where he conducted research under Dr. Gerald Lesley. His undergraduate research focused on the synthesis of novel MOF precursors involving the manipulation of air-free inorganic pathways. Upon starting at Wesleyan University, Sean joined the research lab of Dr. Michelle Personick and began a project to develop a new method to electrochemically synthesize shaped noble metal nanoparticles. The project was quickly successful, and the method was transitioned into a cyclical tool to create shaped nanoparticles by collecting electrochemical data about any particle growth reaction and translate that to either an electrochemical or colloidal approach. Further work involved the creation of novel shaped nanoparticles, mostly with palladium in both systems. Having completed his degree at Wesleyan, Sean will be starting his career as a federal contractor for Universities Space Research Association at NASA Glenn Research Center in Cleveland, Ohio where he is joining the Microgravity Sciences division and is focusing on the production and applications of boron nitride for space and aeronautics.